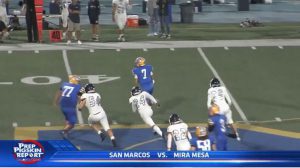 Mira Mesa and its QB rebound for victory

Zappia turned things around Friday night against visiting San Marcos. On his first pass attempt Zappia arched a deep spiral down the right sideline that hit Tajon Evans in stride for an 85-yard, catch-and-run touchdown. Zappia didn’t slow down much after that, leading the Marauders to an entertaining 27-18 win.

“He played much better,” said Thompson. “Much better.”

A senior, Zappia finished the game 11 of 18 for 214 yards and 2 touchdowns. He did damage with his feet as well. The rushing totals were just 16 yards on 5 carries. But two were scrambles that went for first downs to extend Mira Mesa’s touchdown drive that iced the game. A third was a sneak into the end zone.

“That was great. That was amazing,” he said. “We all came tonight and brought the energy.”

“He improvised tonight,” Thompson said of the first-down runs that came when Zappia tucked the ball on pass plays and scooted for first downs. Thompson said quarterbacks practice darting off but added, “You’ve got to be willing to pull the trigger.”

Zappia’s 85-yard TD came on Mira Mesa’s third offensive play from scrimmage for a 6-0 lead. Evans didn’t do anything fancy on the play, save for run as fast as he could off the line past a cornerback.

“I didn’t think he could run with me,” said Evans “And it was a perfect throw.”

Zappia and Evans would connect again with 29 seconds to play before halftime for another TD, this one from 31 yards. This time, Evans was shiftier.

“I put a move on (the defensive back) and he slipped,” said Evans.

Zappia had rolled right, spotted a wide-open Evans, who caught the ball inches from the back of the end zone, supplying Mira Mesa with an 18-7 lead.

San Marcos would mount a comeback. The Knights pulled to within 21-18 early in the fourth quarter on a 12-yard run by Kaden Vohnout and a 2-point conversion.

With the help of a personal foul penalty, Mira Mesa responded. The Marauders covered 70 yards on 11 plays with Makei Thompson, all of 5-feet-9, 160 pounds, accounting for the final 29 yards on a burst up the middle. Thompson was tackled on the 1, but leaned across the goal line for the score.

“The O-line, they did their job,” said Thompson, who finished with 20 carries for 123 yards. “They got a good push, cleared the way, I saw the goal line and I just ran straight ahead.”

“I feel like we should be in the finals,” he said, “playing for a championship.”

To prepare his team, Thompson has lined up a brutal schedule, lining up five Division I non-league opponents: Helix, San Marcos, Lincoln, Grossmont and Madison.

“That helps you win these type of games,” he said. “I’m not afraid of anybody.” 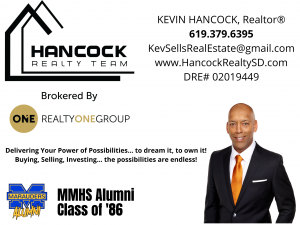 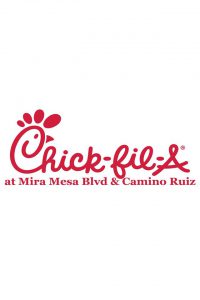